Kieran Donahue is the sheriff of Canyon County and the founder of the Man Up Crusade. His work as a detention deputy, detective in the narcotics divisions, and six years spent undercover to help turn around gang violence opened his eyes to the heartbreak of domestic violence, leading him to found the Man Up Crusade.

Helping the Community as Sheriff of Canyon County

When the former sheriff decided to retire, he recommended that Donahue run for the position. Donahue thought it was crazy. After struggling with it for months, he decided to run. “To me, it’s just a plan by somebody bigger than me,” says Donahue. “It’s a stressful job, it’s 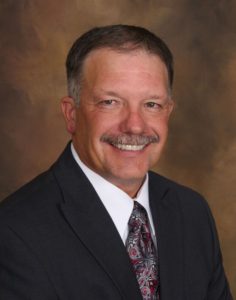 an overwhelming job. You’re a constitutional officer because you’re elected, you’re not appointed.”

Donahue set about using his new position to bring positive changes, such as financial recognition for the employees. “A lot of our folks were underpaid for the jobs they were doing,” he says. They spent a number of years on the market salary analysis to become more equitable with colleagues in other jurisdictions. “Retention is huge for the taxpayer because I can put $100 thousand or $200 thousand into a person to see them stay with us for a couple of years, and then walk off to another agency for $3 or $4 more an hour,” Donahue says. “My taxpayers just took a bath on that one, plus we lost that experience, that knowledge,” he says. Further, it forces him to put an officer to work with less experience and less knowledge, which is a liability. Making sure his employees can make ends meet is good for the whole community.

Much of the good that Donahue has done with the position was built on the foundation of his predecessor. “I’m very proud of where we’ve come from and where we’re going,” he says.

The Biggest Challenge in Helping the Community

The jail crisis is the biggest problem facing Canyon County. “That jail was built when there was 90 thousand people living here,” says Donahue. “We have nearly a quarter million people living here.” That doesn’t include people who move through the area committing crimes without living here. “There’s no room for them all.” Due partially to the lack of space, Donahue has about 1,000 people out of jail on alternative sentencing. About 600 of those haven’t been through their pretrial yet, and about 250 of them should be in jail because they are serious offenders. “But there’s no room for that 250,” says Donahue. “So they’re out walking the streets, potentially committing new criminality, new victimization, cost to the taxpayer, cost to the judicial system, cost to the hospitals. It’s a cascading effect.”

The county has tried and failed three times to get more funds for a bigger jail through bonds. The failures may be due to a lack of education about the problem. “It has to be very transparent to the taxpayer,” says Donahue. To achieve that transparency, a long-term assessment was authorized. The assessment is 4 months long, but at only 3½ months in, the result is that Canyon County jail needs 1,050 beds to use right now. They have 477 beds.

Helping Through the Man Up Crusade

Back when he and his wife founded Man Up, which is an acronym for Making Awareness Now Using Purple, 1 in 4 women and 1 in 7 men were victims of domestic violence. Now it’s 1 in 3 women. “This is an epidemic in our society,” says Donahue. Every 9 seconds, a woman is beaten in America. Every day 3 women and 1 man will be murdered by their domestic partner. Across the nation, 50% of dispatch calls are for domestic violence. Children who grow up in homes with domestic violence are more likely to be victims or offenders later in life, because they see it as normal. “Where does this end?” asks Donahue. “We’ve got to do better than that.”

Donahue and his wife created Man Up with the ideology of an American cowboy stepping up to do the right thing and raising public awareness of the issue. They started in Idaho and have moved into 13 states so far. The program travels with professional rodeos, PBR events, county fairs, and state fairs, where a day is designated as Purple Day. Purple is the color for domestic violence, much like pink is the color for breast cancer. The goal is to bring awareness and solidarity about the issue of domestic violence so that the cycle can hopefully be broken for the next generation.

The Response to Man Up

The Man Up Crusade is making a difference. Donahue’s wife has fielded phone calls from as far away as New Jersey and Philadelphia of people saying they are offenders but they love their families and want to stop, and asking where to get help. “What that tells you is that we’re making progress, if the offenders [are] calling us,” says Donahue.

They also hear stories from survivors and victims. “When you’re standing there face-to-face with that and they tell you these things, it deepens your resolve to end this,” says Donahue. “It strengthens our resolve to get to those kids in the next generation and stop [it].”

The Man Up Crusade is now endorsed by the National Sheriffs’ Association and over 3,000 sheriffs want to be involved at the national level. Donahue has also spoken to congressmen and senators about Man Up.

In 2017, Canyon County won the Crime Victim Services Award from the National Sheriffs’ Association, which recognizes sheriff’s offices that go the extra mile for victims in their society, partially due to Donahue’s endorsement of the Start By Believing campaign, and his mandatory training for all his staff to learn about Start By Believing as well.