I  saw this story in the news the other day. Two real estate agents, because of their advertising, are getting blasted on social media. They offended almost everyone in their marketplace, mainly hardworking moms.
Let me set the scene. Costello and Costello Real Estate Group created the ad. The ad shows Chase and Jeffrey Costello on one side dressed in suits, a mother with three children on the other. The mother with three children is tied up, while a daughter paints her face. [In other words, pure chaos is happening.] There is also a baby, sitting on the floor with a colander on her head, and a duck [yes, an actual duck] standing in the disheveled room.
The wording on the ad says “Part Time Agent” next to the woman and her children, and “Full Time Professionals” underneath the Costellos. On the flip side, it lists what the Costellos can provide versus what the woman can offer. For the woman with three children it says, “Available at THEIR convenience NOT yours”. Said different, mothers with children will always prioritize their children’s needs over those of the client, and you’re going to get crappy service as a result.
Like I said, this ad is getting blasted all over social media and working mothers everywhere are fuming, and rightly so.
Putting aside the controversy and sexism of the ad, the remaining question is, “When selling your home, should you hire a part-time agent or a full-time agent? Does it matter? Is one better than the other?”
As an entrepreneur and full-time agent myself, you may expect me to give a biased answer. You’d be wrong. Fact is, whether someone is part-time or full-time says nothing about one’s ability to perform or his or her skill set. Common sense tells us this is true. Just look at the profession of plastic surgery. Now, think Tijuana, Mexico. How many horror stories have you heard over the years about botched surgeries? There is even a TV show on Bravo called Botched that documents these people’s stories as their nightmares are reversed.
My point? There are full-time plastic surgeons in Tijuana that are cheap, that might not have superior procedures or a sanitized, germ-free environment, who botch surgeries and leave their victims destroyed. And, given this situation, would it have mattered if the surgeon were full-time or part-time? No. Because that’s not the central question anyone should be focused on.
Let’s look at another example. Let’s say you needed to hire a financial planner. You could hire John Smith who is a full-time money manager, or let’s say you could hire, but only on a part-time basis, Warren Buffett. I know who I’m going to choose. Who are you going to choose? Me too. Warren Buffett.
So we know that whether someone is full-time or part-time is not important. As consumers, what we really want is the best, smartest, more capable individual. After all, even if a person is full-time, do you really think that person is spending all of his time on just your home or financial planning? They couldn’t, even if they wanted to.

What we must truly focus on when making such a decision are the questions, “Does the agent have a superior moral code? Does he or she have a superior method? Has he studied and documented his research, to explain how he’s able to get clients a superior result? And maybe most important, when things go wrong, and sometimes they do, does she have the integrity to come clean and do everything she can to make it right?”
I noticed the ad put out by the Costellos makes the claim, “A Team ALWAYS outperforms an individual,” making the case that there are two of them versus one part-time agent/full-time mom.
Nonsense. Smoke and mirrors. I don’t know them personally, so I’m not making a final judgment, but two incompetent idiots will never outperform one part-time Warren Buffett.
Success and a superior results come down to research and superior thinking. This leads to, on the client’s behalf, superior positioning, execution, and decision-making. There are no substitutes for these three things. To hire an agent based on whether that person is part-time or full-time, frankly, is a ridiculous notion.
—————————————————————————- 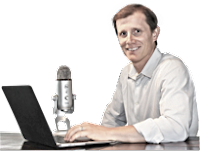 Mike Turner is the author of ‘The Value-Driven Approach: A practical guide to protect yourself from real estate greed & bank an extra $30,000 by thinking like the great Warren Buffett.’ Host of the Boise Real Estate Radio Show, and Boise Advice Givers Podcast.  Founder and owner of FS Brokers – Real Estate, and Fever Streak Press. He lives in Boise with his wife and two kids. www.MikeTurnerBoise.com